Dr.Beck attended an amazing dramatic reading, in Tamil, of a new play by Dr. Suvendrini Lena called The Enchanted Loom

Dr.Beck attended an amazing dramatic reading, in Tamil, of a new play by Dr. Suvendrini Lena called The Enchanted Loom 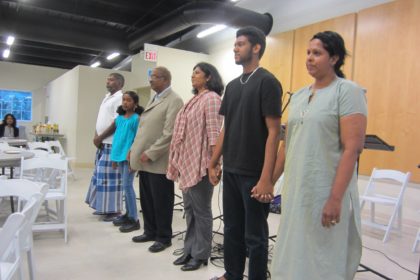 On September 9, 2017 Dr. Beck attended an amazing (if only partial) dramatic reading, in Tamil, of a new play by Dr. Suvendrini Lena called The Enchanted Loom. Originally written in English by a Sri Lankan immigrant to Canada, the play is about the deep anguish families enmeshed in the recent Sri Lankan conflict felt and how the core personal bonds tying one particular (largely fictional) family together underwent near-unsustainable stress as its members became deeply entangled with this tragic situation. The play is a psychological masterpiece that reveals much about how specific cultural attitudes and imagery linked to the Sri Lankan Tamil ethos become tangled and challenged in deeply personal ways by the horrific circumstances of this terrible civil war. The focus is on a deeply disturbed father/husband, his wife and their three children, a young daughter and her elder twin brothers one of whom has already disappeared in the conflict and is presumed dead. The other brother is an advanced research student who feels he, too, is morally obliged to defend his family and their shared ethnic-Tamil roots through violence, at this moment of grave danger to both. His younger sister is too junior to realistically offer herself as a fighter, but her poetic visions and repeated commentaries on the situation she sees evolving around her are striking. Her character, in particular, is reminiscent (for me) of young sister of the medieval Legend of Ponnivala’s twin Tamil heroes who is named Tangal. It is striking that her twin brothers also resemble Ponnivala’s set of heroic twins in significant ways. The Enchanted Loom is available in both English and Tamil and so will be accessible to many potential reader-audiences. The story provides a provocative case study that could be of real help to clinicians, psychological councilors and social workers alike, especially when working with their Sri Lankan clients. The story was discussed by a panel of academics after the performance, and in that conversation several commentators made it clear that this play will be useful to many professionals charged with trying to help refugees from this terrible war who have now settled in and around Toronto, Canada. The play will be performed again, in full, at 1:00 PM on November 25th at Toronto’s Bendale Library. Admission is free. My photos show the performance at various stages, during which various combinations of readers were actively engaged while others waited their turn on the sidelines. 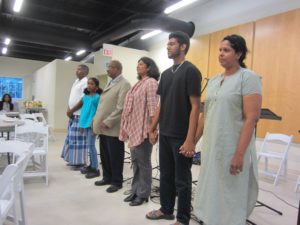 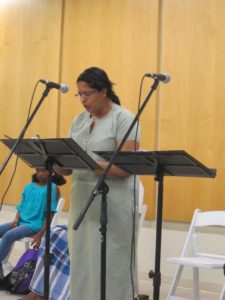 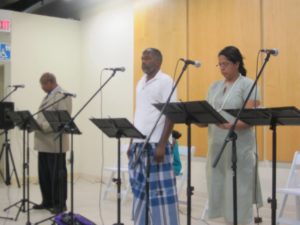 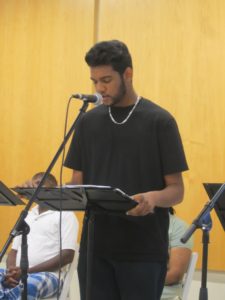 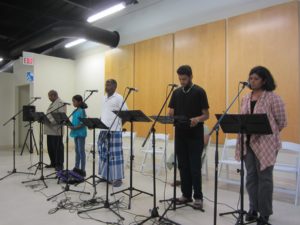 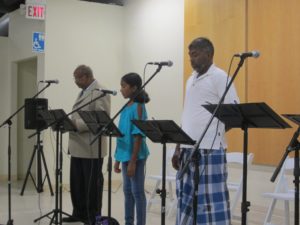