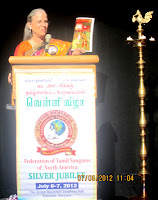 The Ponnivala team was in Baltimore MD for the 2012 FeTNA Silver Jubilee Convention. Tamils from all over North America converged on the spectacular Joseph Meyerhoff Symphony Hall from July 6-8 for a weekend of music, food, networking, and cultural exchange.

At the welcome dinner on Thursday evening, Dr. Brenda Beck was asked (unexpectedly!) to come up to the podium and say a few words (in Tamil) about the Ponnivala project. Her speech was received with raucous applause, and chants of “Brinda! Brinda!”…which of course took her completely by surprise!

As part of the official program beginning on Friday, Dr. Beck gave a Powerpoint talk on the Ponnivala story, outlining why this epic is so significant to a deeper understanding of Tamil culture.

On Saturday, the team hosted a Parcheesi game for kids. Parcheesi is a traditional Indian game that was a favourite passtime of the heroes of the Ponnivala legend, Ponnar and Shankar. In our version, a board 4 feet by 4 feet is used, covering a large area of the floor. The kids at this event were divided into girls’ and boys’ teams. It was an interesting and fun experience, because although individual girls ended up getting to the centre of the board first, the boys strategized together and ended up landing all four of their markers in the centre at the same time! 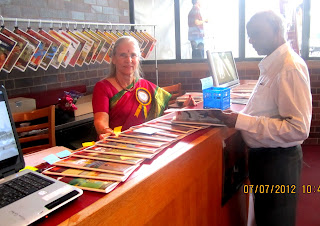 The centrepiece of the event for us of course was the booth where we had all twenty-six chapters of both the English and Tamil graphic novels laid out on display. Our display booth garnered a lot of attention as people were excited about our interest and enthusiasm for Indian culture and history. The products were extremely well-received, and it was the grand unveiling of the first run of printed Tamil edition comics!

All-in-all it was an exciting and enriching experience, and we hope to be invited back to next year’s FeTNA Convention in Toronto!

The entire series of Legend of Ponnivala comics is now available in print and digital editions at www.ponnivalamarket.com.