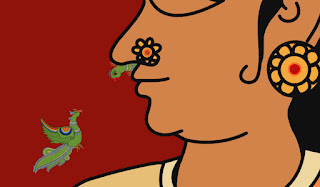 In The Legend of Ponnivala, Queen Tamarai must do penance by sitting in meditation for twenty one years before being permitted to take counsel with Lord Shiva. During this protracted meditation, two parrots take up residence in her nose. Before Tamarai awakens the parrots are shooed away by Lord Vishnu, and seek refuge in a forest kingdom under the protection of Viratangal.

The idea of birds nesting in someone’s nose seems a bit strange to Western readers, but there’s some significance to this occurrence when Eastern alchemy is considered. It is believed that when one enters a deep state of meditation, the physical body actually becomes hollow, making a potentially suitable residence for something like a bird (if the meditation is long enough).

Birds often represent some aspect of the spirit or mind in various mythologies, and this is even more important when we realize that many species of parrots mate for life. So it is that the parrot couple, husband and wife, are symbolic of family and marital loyalty. When their bond is disrupted by the capture of the wife-bird by Tamarai’s sons, Ponnar and Shankar, a war results, bringing an end to the family dynasty.

In Norse mythology, Odin; father of the gods and ruler of Asgard; had a pair of ravens named Huginn and Muninn. Their job was to fly around the world during the day and return to Odin in the evening with news of what was happening on Earth (Midgard). Their names mean “thought” and “mind” (or “memory”) respectively, and it’s believed that they represented these aspects of Odin’s daily meditation. While the lord of gods meditated, his thought and mind ventured out to open his consciousness to the goings on of the world under his protection.

Huginn and Muninn also represent the ideas of the fylgia; a supernatural companion that takes animal form in order to accompany a person in relation to their fate or fortune; and hamingja; the personification of the good fortune of a person or family, often in shape-shifting animal form as well. This ties the connection together nicely, as the fortunes of the ruling family of Ponnivala, as well as their enemies, are intimately tied to the treatment and deeds of their close animal companions.

Are there other mythic examples of birds representing these aspects of the mind and spirit in meditation? What about other duties they may be assigned? Share your thoughts below.