Twin Warriors vs. The Giant Boar

Twin Warriors vs. The Giant Boar 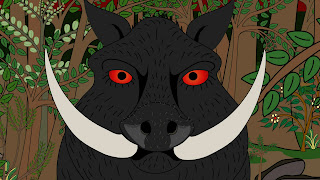 In The Legend of Ponnivala, the twin kings Ponnar and Shankar face off against a giant boar named Komban. Komban is the offspring of a little sow who was once brought to Ponnivala as one of the royal animals. When Kunnutaiya and Tamarai set out on their journey to the Gates of Heaven to resolve the matter of their childless state with Lord Shiva, all the barren animals ask them to request a boon of children from the god on their behalf.

The pig, however, falls asleep across their path. In her rush to get moving Tamarai kicks the pig to wake her up. Indignant, the pig curses Tamarai and swears that the son she has will grow into a huge black boar that will ravage the land and kill Tamarai’s sons.

After Tamarai’s sons, the heroes Ponnar and Shankar, have grown, the land is ravaged by the great boar Komban. Komban challenges the young kings, who have stolen a parrot from the neighbouring forest kingdom. Through pitched and very dangerous combat, Komban is killed and his remains divided between the men of Ponnivala and their allies.

A similar tale is read in Greek mythology in the story of Castor and Pollux. Oeneus of Calydon commits a great insult when he offers a harvest sacrifice to all of the gods except Artemis. Enraged, Artemis sends a giant boar to ravage the fields of Calydon. According to the Illiad, Oeneus calls on his son Meleager to organize a hunting party (which includes, interestingly, the twin warriors Castor and Pollux, Meleager’s cousins). The boar is killed and the meat divided. However, Meleager’s uncles are offended that he has given a greater portion to the huntress Altalanta, and after further combat Meleager kills them, which incites his own mother to curse him.

We’d love to hear your thoughts…can you think of another mythic example where a great beast (not necessarily a boar, though that would be cool) has been unleashed to exact revenge for an insult? Post your comments below.